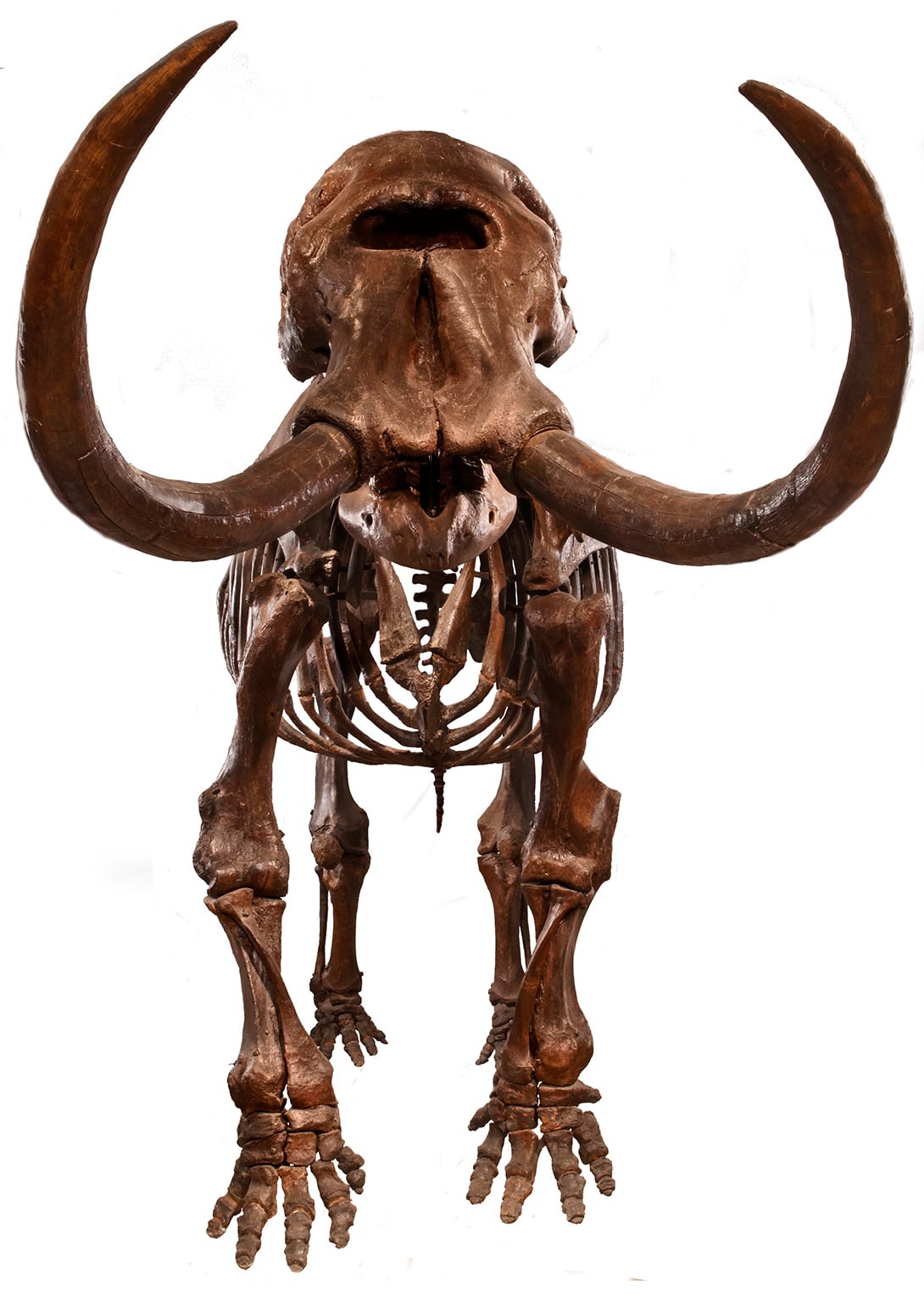 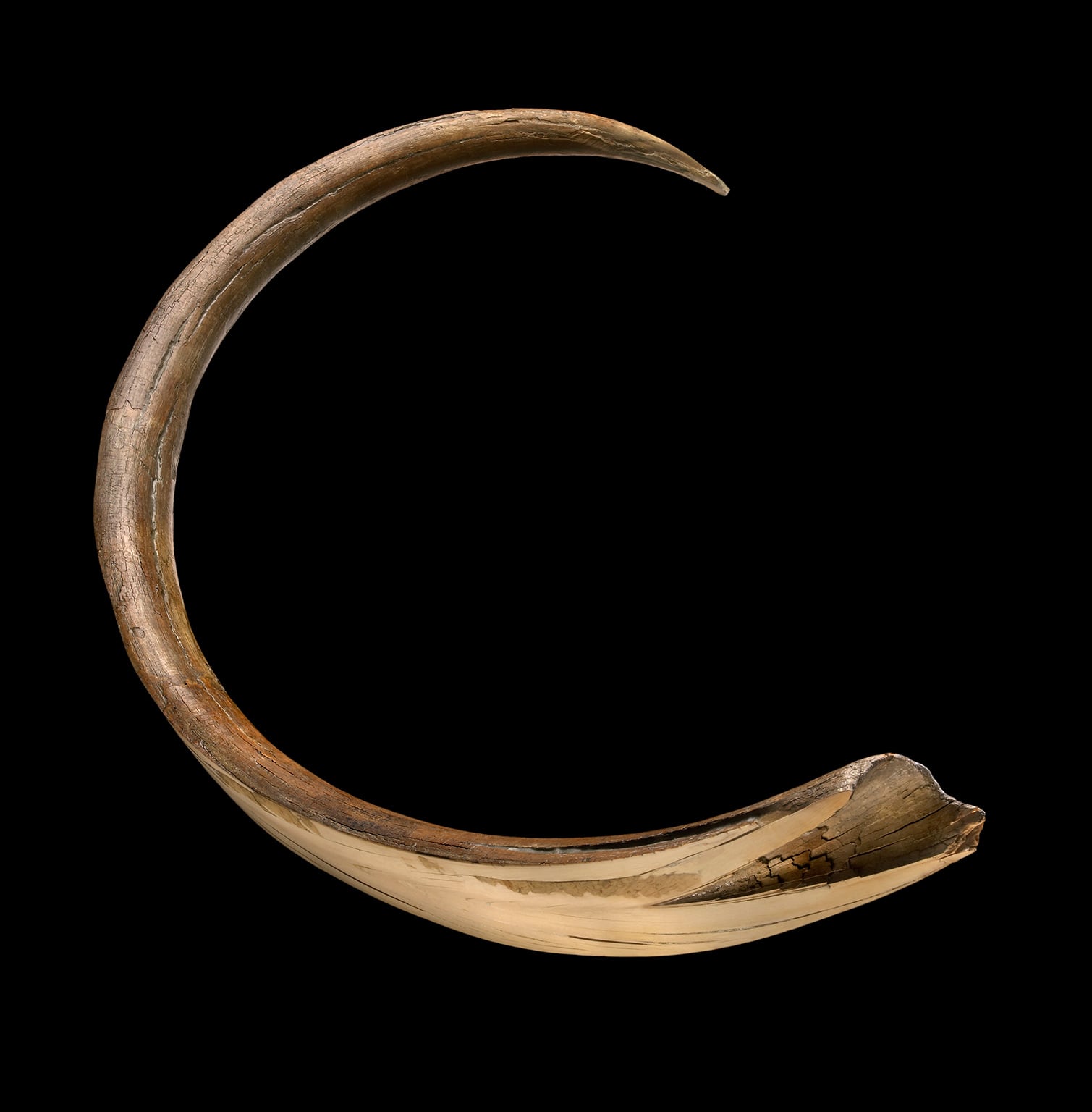 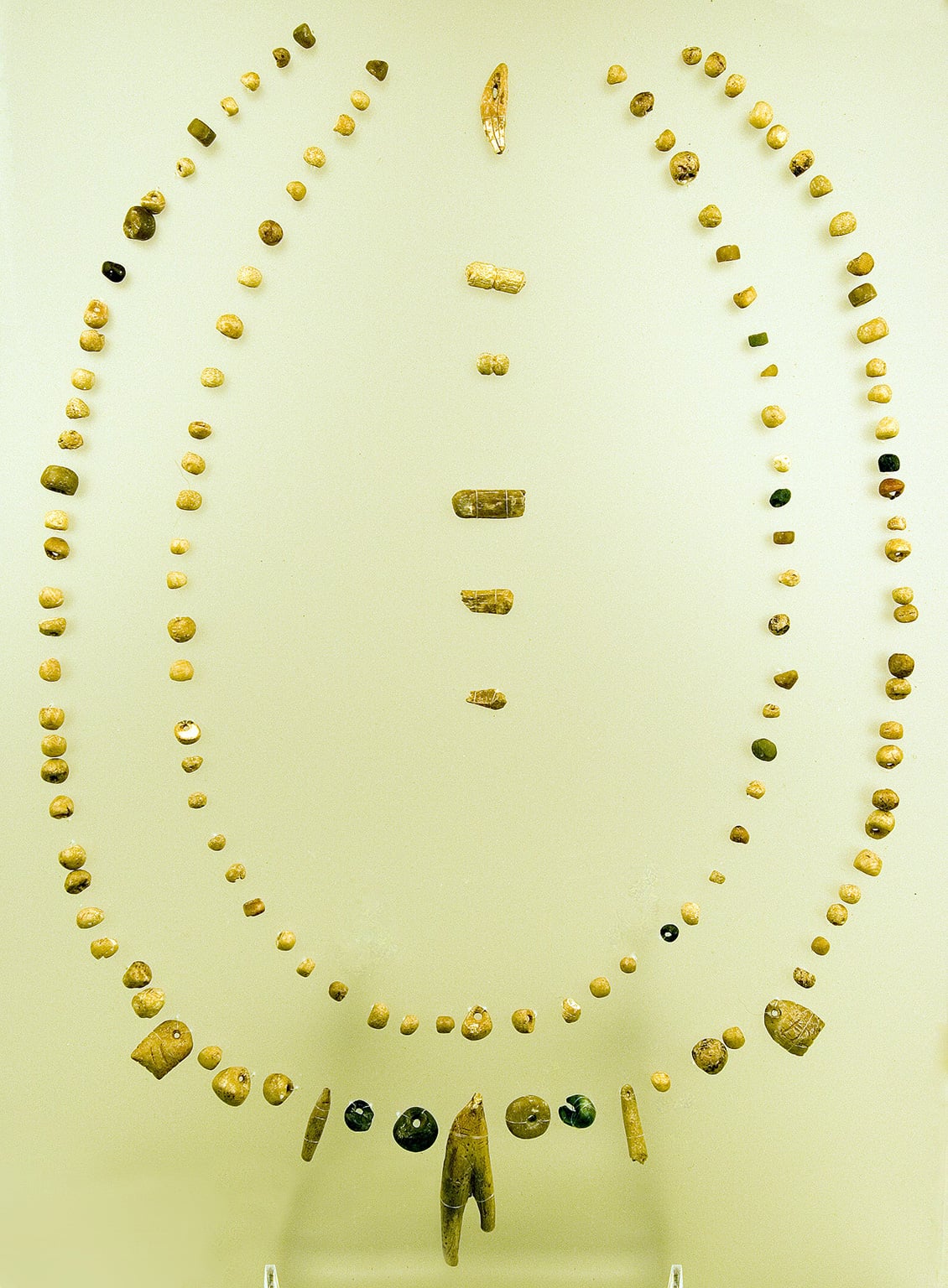 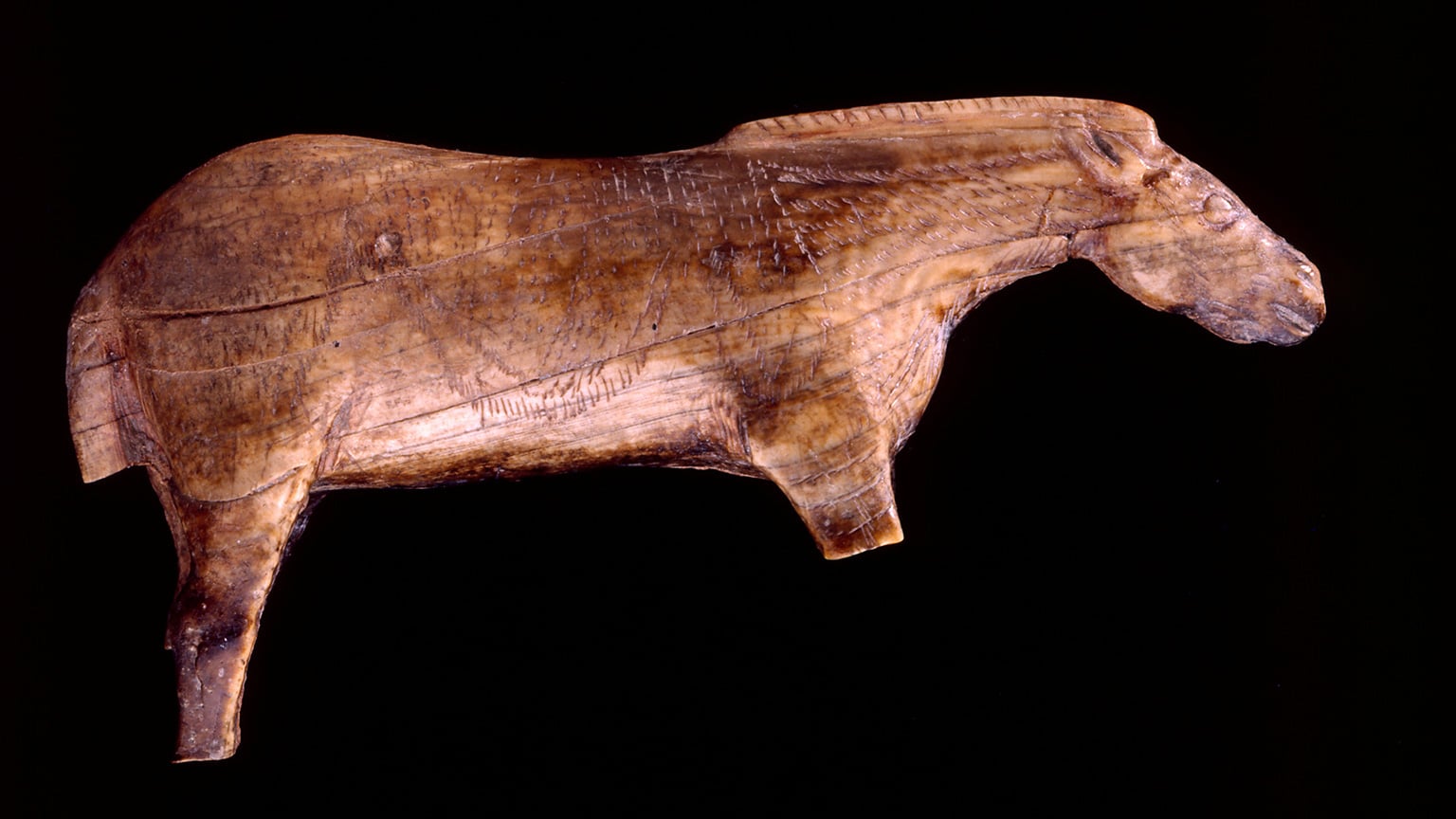 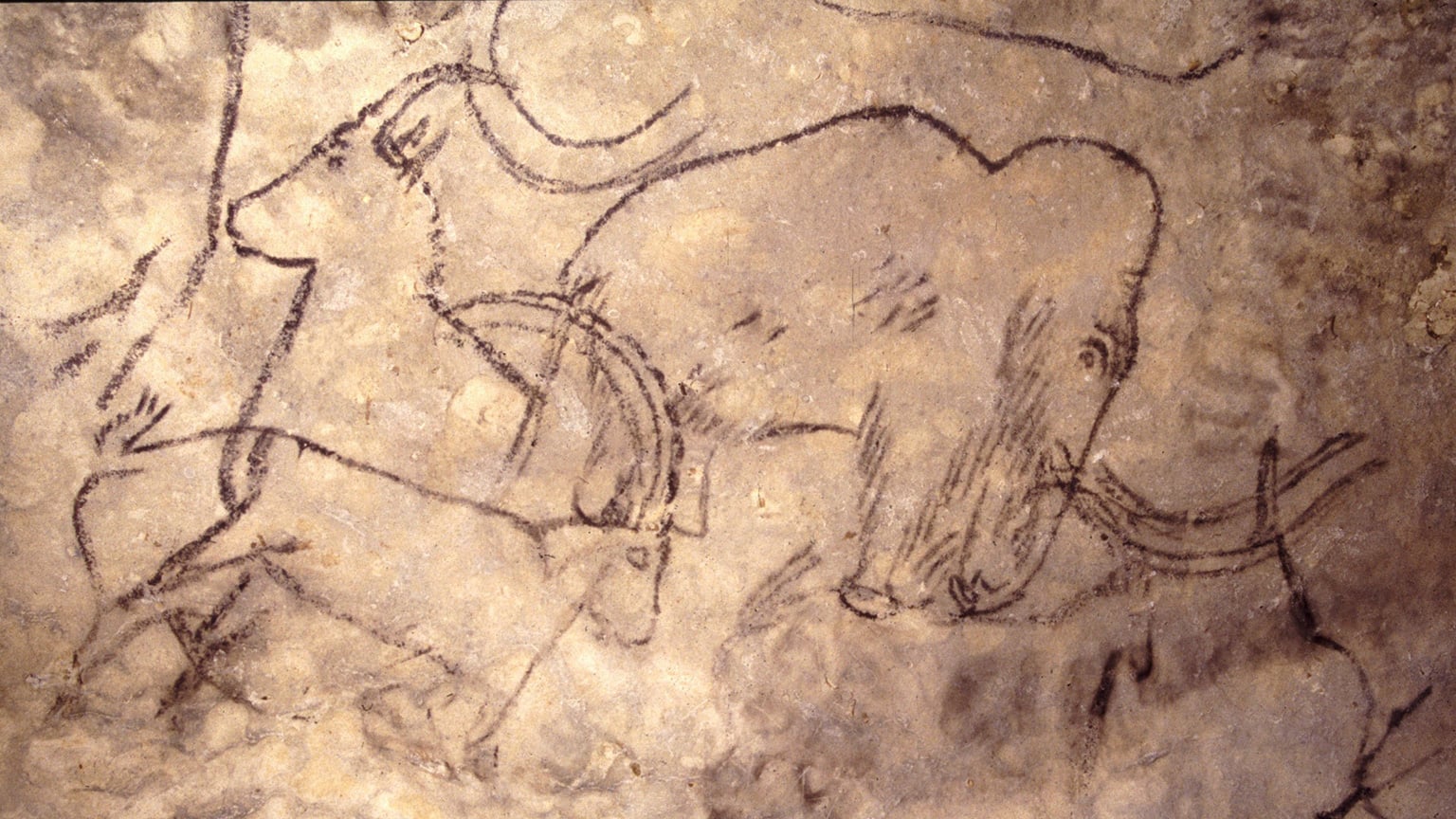 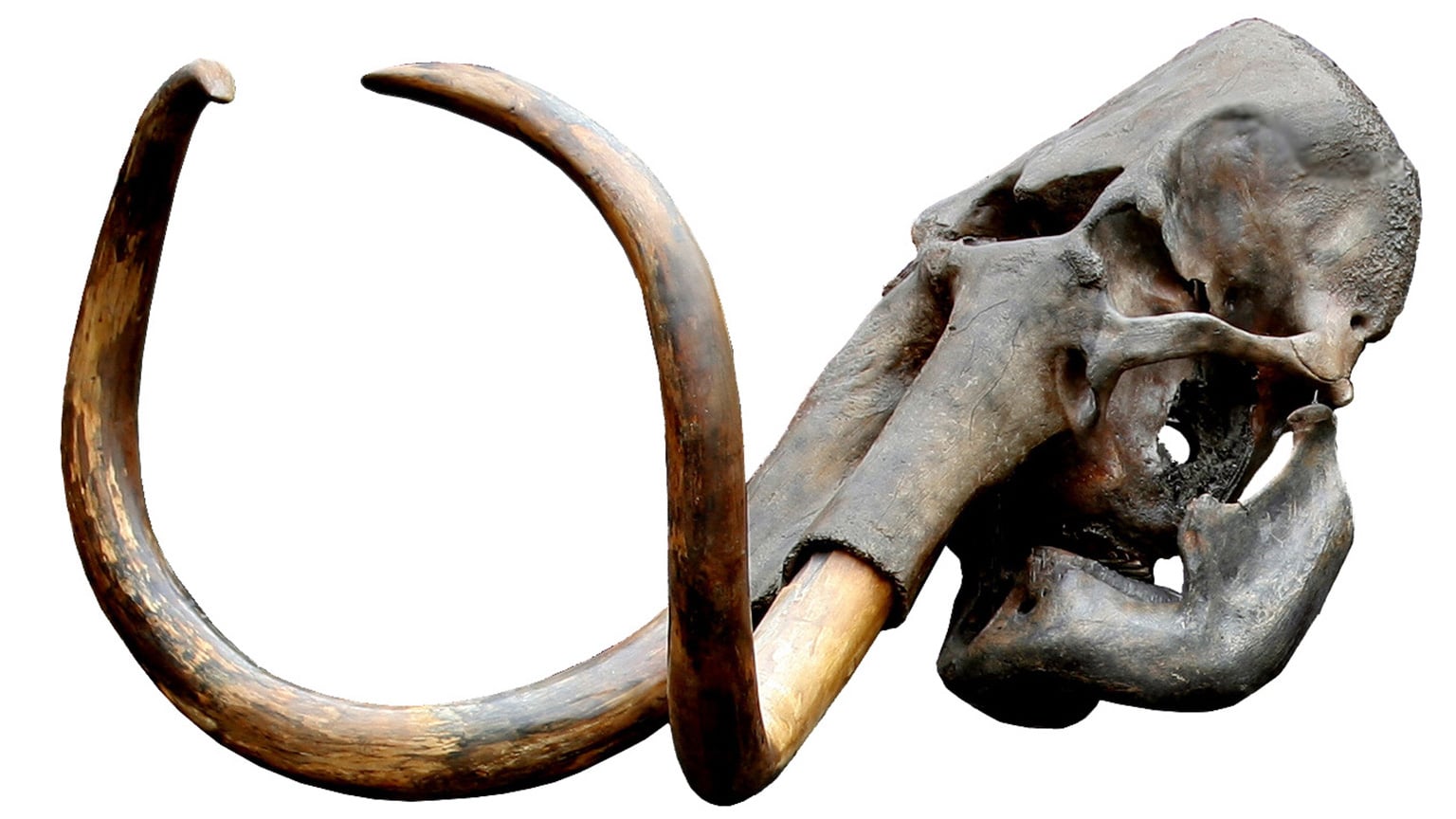 Mastodon Skeleton: This skeleton of an American mastodon shows the beast’s tusks have a more pronounced curve than those of today’s elephants,

Scientists examine mammoth tusks to discover how old the animal was at the time of its death. Similar to rings on a tree, mammoth tusks grew in layers, year by year,

Necklace, from Abri Blanchard, France, made of stone, bone and mammoth ivory and is estimated to be 35,000 years old,

Unlike dinosaurs, mammoths and mastodons lived side-by-side with humans. This piece of mammoth ivory, carved in the shape of a horse, is one way humans utilized mammoths—as a vehicle for art,

Rouffignac Cave Painting: Humans were clearly influenced by these great beasts. This depiction of a mammoth, painted on the walls of Rouffignac cave in France, dates back 15,000 to 20,000 years ago,

Woolly Mammoth Skull: Visitors to Mammoths of the Ice Age will be able to see fossil skulls, as well as life-size replicas of these ancient beasts,

Skull casts and fossil jaws, teeth and tusks, as well as some of the oldest human art in existence, this exhibition reveals what life was like for the mammoth and the mastodon, two the most iconic mammals of the era.

Originating in Africa, the family tree of elephants, mammoths and mastodons can be traced back 55 million years.

Because they had different diets and did not compete for food, mastodons and mammoths were able to live in harmony during the Ice Age, with a mammoth consuming around 226 kilogrammes of vegetation every day.

The exhibition charts the key differences between these two creatures, for instance, revealing that mastodons were shorter and stockier than mammoths, with thicker bones and differently shaped tusks, as well as making comparisons with their present-day descendant – the elephant. It will also explore their social behaviour and ecology based on fossil evidence.

Human accounts of these great beasts are told through early artworks that depict mammoths, shown in the form of miniature carvings made from bone, stone and mammoth ivory that are thought to have been created between 35,000 and 10,000 years ago.

The exhibition was originally designed and shown at The Field Museum, Chicago and has also been display at the National Museum of Scotland.

Mammoths of the Ice Age from National Museums Scotland on Vimeo.

Wildlife Photographer of the Year 2021

Wildlife Photographer of the Year 2021